For those of you looking for that special gift to get me, the Animaniacs DVD collection is it.  I just read where in 2007, Warner Bros. is releasing the first 50 episodes in a DVD set (there’s 99 episodes total).  Thank you WB!  Not sure if it is out yet, but keep an eye out.
[video]
I’ve wondered for a long long time what happened to this blockbuster Steven Spielberg series.  Think calling this a blockbuster is going a bit too far?  Not so.  Per the updated Wikipedia entry:

Animation fans consider Animaniacs the high point of the Warner Bros. revival of the 1990s that was inspired by the original Termite Terrace.

Animaniacs premiered on September 13, 1993. New episodes of the show were aired during the 1993 through 1998 seasons, and episodes were rerun in syndication for several years after production of new episodes ceased. One feature-length direct-to-video Animaniacs movie, Wakko’s Wish, was released on VHS only (there has not yet been a DVD release) in 1999. The series was popular enough for Warner Bros. Animation to invest in additional episodes of the show past the traditional 65-episode marker for syndication; a total of 99 episodes were finally produced. One theatrical cartoon short film starring the Warner siblings, “I’m Mad,” was produced and released to theaters in 1994 with the feature Thumbelina.

The show introduced the popular cartoon characters Pinky and the Brain, who were subsequently spun-off into their own TV series in 1995.

I’ve been a long-time fan of this series and have many sound-bites of the series.  Such as Yacko’s Multiplication skit (grab a piece of paper and follow).

It wasn’t so a kids cartoon, but targeting more of the young-adults to early 20 year-olds.  I was 17 when it first aired, and watched it religiously until I got bogged down in college.  After that, I kinda of lost track of them - catching an episode here and there.  And then, they were pulled from syndication in early 2000.  Gone. 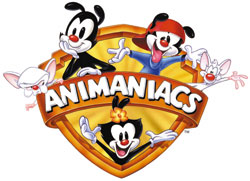