Like what you see here? Have kids? You may want to check out my STEM series
of posts where I am introducing our children to STEM (Science Technology
Engineering and Math) at early ages - and they are loving it.
http://eduncan911.com/stem

Google and the community have jumped in with both feet with the AIY Projects release and the Voice HAT kit from MagPi, submitting dozens of PRs and updates to both the Google Assistant SDK and Voice Recognizer projects.

In addition, the Google Assistant SDK has been updated to support:

Before we get started, a quick refresher for those new to the projects.

What is Google AIY?

Google has jumped into the A.I. World of Amazon’s Alexa and IBM’s Watson with their own version called the Google Assistant. The difference being Google brings strong search, wide integration and an open SDK. 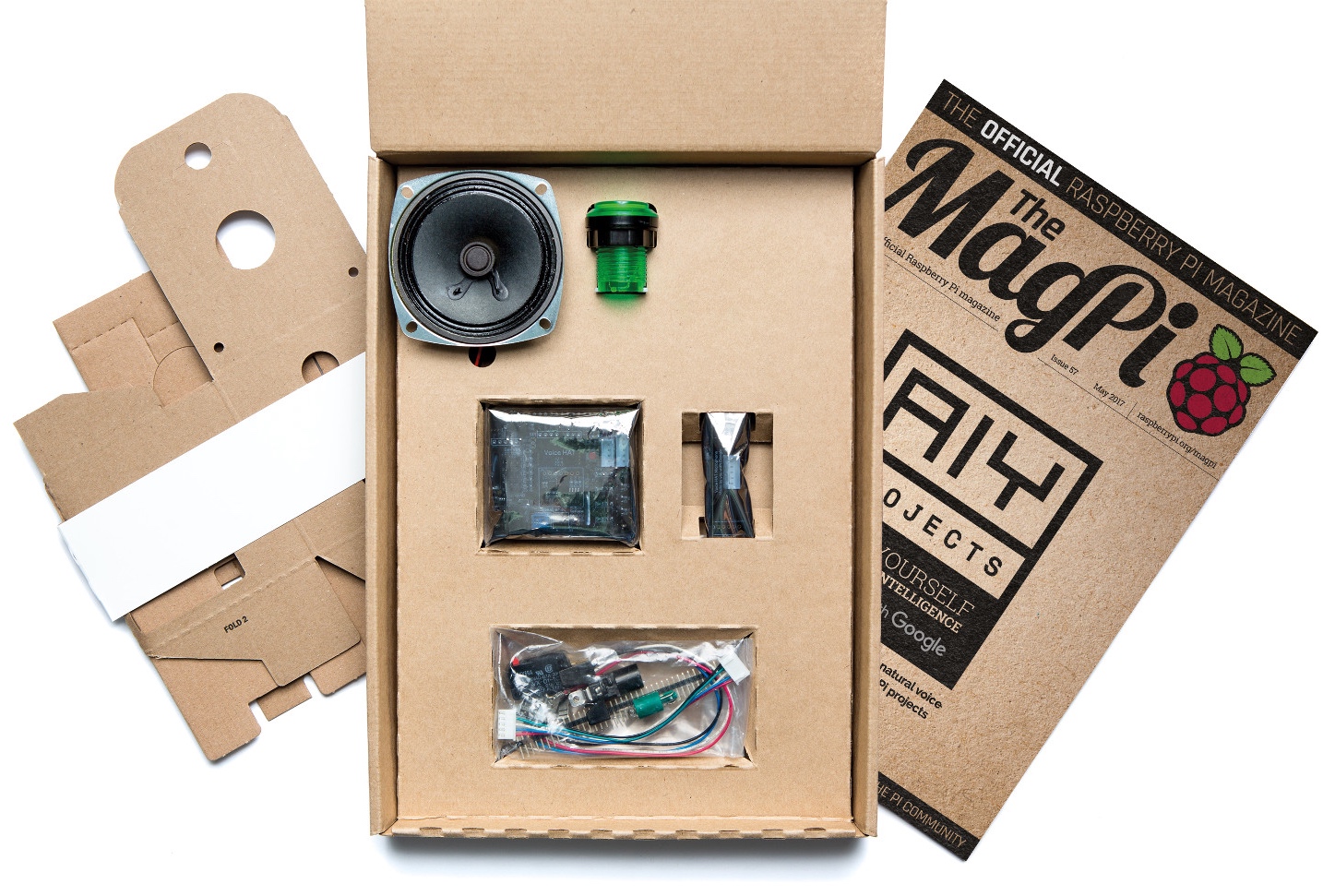 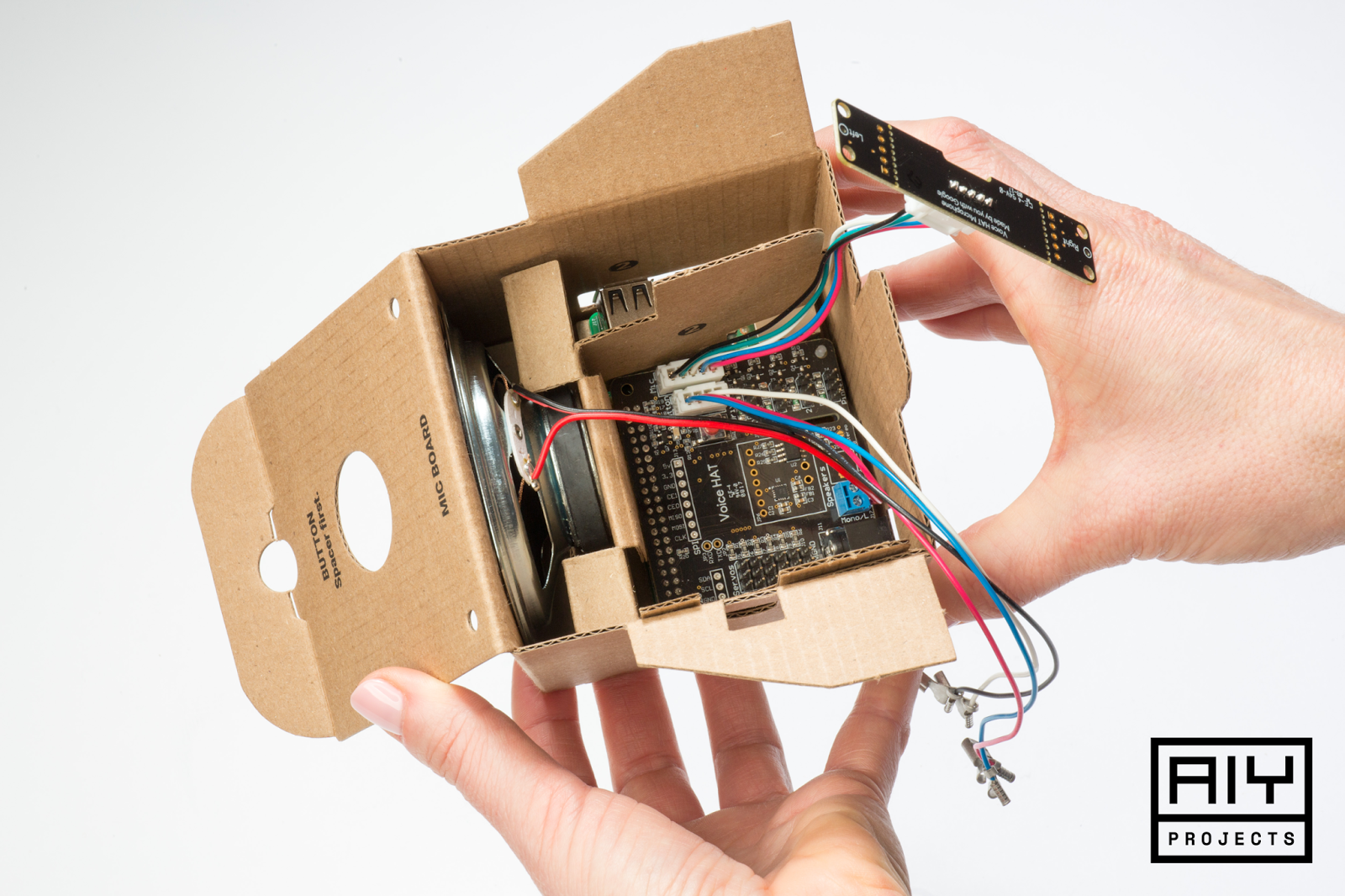 Google and the magazine MagPi teamed up to produce a simple AIY project called the Voice Kit, which is cardboard cube that houses a Raspberry Pi and a number of components. What’s even more cool is everything that was included with the kit, which came free with the MagPi magazine!

The only things required was a Raspberry Pi (I used a Pi 3), a power adapter and a microSD card – standard things you should have laying around if your are a Pi guru. 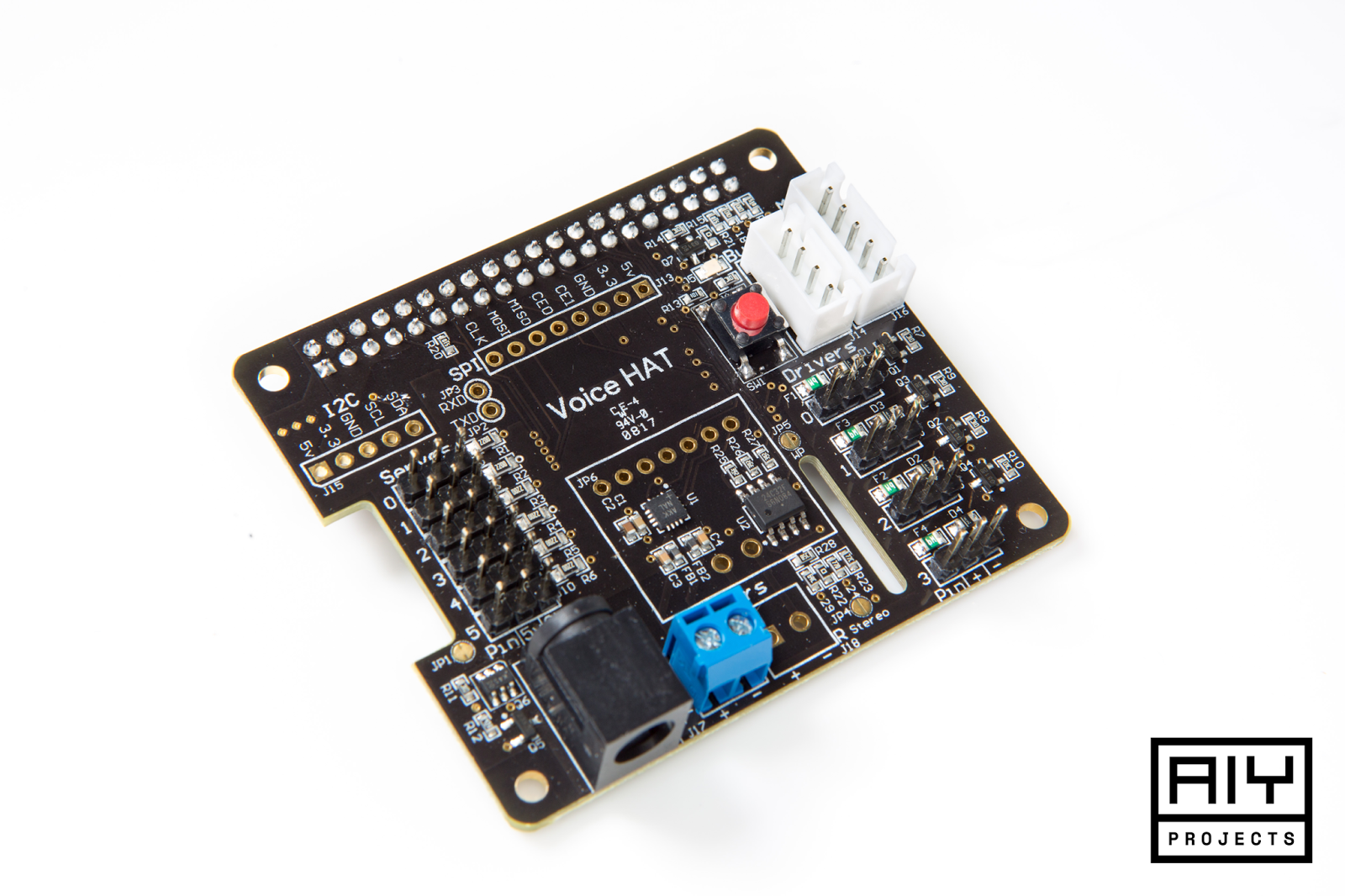 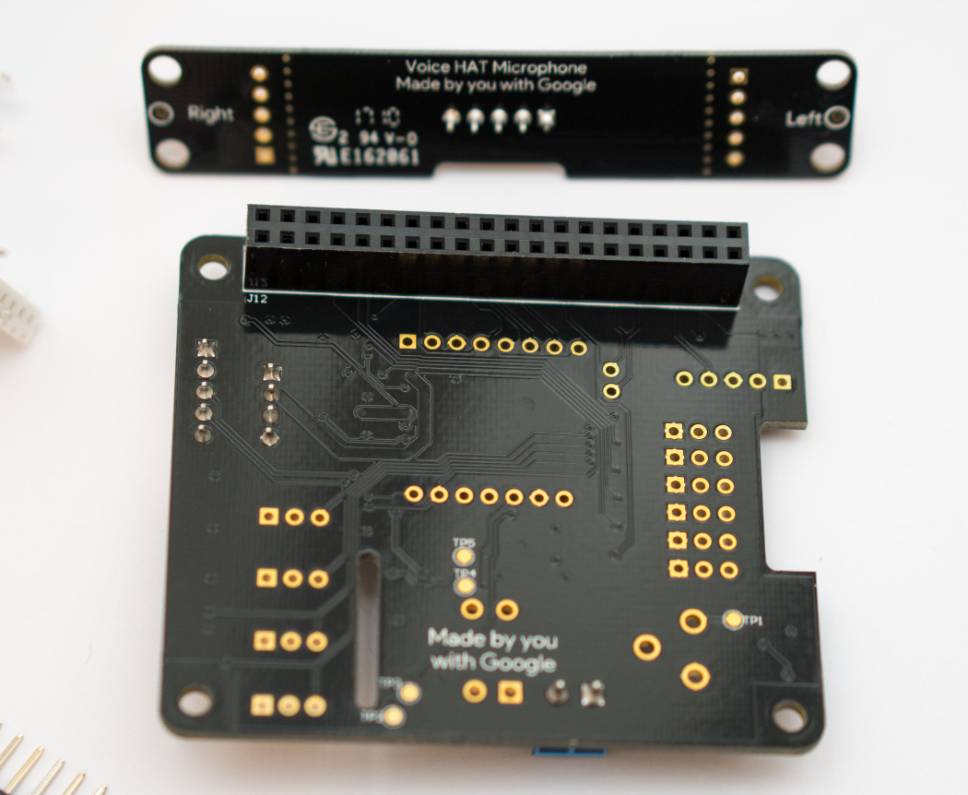 HAT stands for Hardware Attached on Top, which are devices you simply attach directly to your device.

The Voice HAT that is included with the Voice Kit, part of the AIY Projects noted above, is impressive that it was free. It has several GPIOs available on it, along with several soldered on connectors. Hardcore Raspberry Pi gurus have balked, “come on, a button and LED?” But really, Google is targeting a younger audience with these components to make it an easier barrier of entry into the world of embedded devices.

Essentially, this Voice HAT makes it really easy for anyone to get involved. If only the SDKs and code were as simple (see upgrading below).

Currently the only SDK available seems to be Python, and only for Raspberry Pi. But Google has said they are committed to supporting several mainstream hardwares and other languages in the future.

If you want to be on the bleeding edge to enable these updates, be
aware that pulling down the latest source code from the master branch is risky.
It can break the entire setup, forcing you to reinstall everything from scratch.
I have noticed the devs adding c.i. travis, coverage and tests, which really
helps stabilize it. But be aware, something could still slip through.

These are the instructions as of late May 2017.

So far, here’s what we’ll be doing:

Here’s all the scripts in one go. Log into your Raspberry Pi, or use the Start Dev Terminal from the desktop:

As long as you did not modify any of the files, those should have ran smoothly. If you, like me, were tinkering with the src/main.py and got a conflict, erase the changes by using git checkout <file> (make a backup if you want first with cp <file> <file>~).

At this point, you should be able to test everything is working:

See if you got the latest SDK by testing the “Timer” functionality:

There’s been a lot of movement lately. You may want to backup your existing config file and bring over the newest versions, then re-implement your configurations.

You’ll notice the new “ok-google” trigger as well as the trigger sound and more.

If you want this automated in the future, add a rm ~/.config/voice-recognizer.ini to the upgrade steps before running the scripts/install-deps.sh file – as this file actually copies over the latest config files, if they don’t exist.

This process is preferred over the manual method talked about in Raspberry Pi forums. For one, it won’t break your installation by modifying files that will create a conflict if you update the repository to the latest.

It’s all merged now! Though, it only supports ARMv7 and newer (sorry Pi Zeros and Pi Ws).

After performing all the upgrades above, test the new trigger:

If you want this to stick, to be persisted for the auto-start services, edit the voice-recognizer.ini file as per the original setup docs:

And make the trigger say “ok-google”:

You can only have one trigger with the current project at this time. Feel free to submit a pull request to enable multiple triggers.

Press CTRL-X and Y to save. Then restart the service:

Try having a conversation with “Hey Google” to confirm the SDK continues your follow up questions:

Notice how the SDK remembered you previously searched for the distance of Japan? This was a feature that Google announced back in 2015, contextually aware searches of continued searches. And it has been brought over to the Assistant SDK.

Try the Trivia Game for a long extensive test of the conversation feature:

Setting to Auto-Start on Reboot/Power On

If you want it running all the time to let the family play Trivia every morning, set your services to start on boot:

Wait about 30 seconds and see if the button starts flashing again.

You gotta love Google’s Cardboard VR gimmick when they came out. People were paying $1000 for VR headsets, and here’s Google with a $15 kit to do the same. Sure, the experience is better on the $1000 kits (I myself have spent a lot of time with the HTC Vive). But there’s something about going back to that cardboard clip on that makes you feel like Google enjoys shaking up industries.

And here we are, with Google jumping into the A.I. devices with a bottom-dollar hackable entry that anyone with a few bucks can run out and pick up.

Though, updating it, especially for non-Python gurus, is a PITA and subscribes most people who can only enjoy this to a very small niche of developers, who happen to know Python and git.

Feel free to reach out in the comments for help.

Hopefully by the time you read this and try to implement the changes, they will have fixed all the missing dependencies. If not, continue below for some hints on how to fix them.

Remember to activate your env/bin/activate before doing any of this, to keep it in the same virtualenv.

This keeps everything installed in the original location that the install-deps.sh file put them. Don’t worry, it’s a Python thing.

I had to install the latest SDK to get the hot word detection fixed working in the initial testing of the branch by drigz:

That was 2 days ago. As of now, it is part of pypi (part of the normal dependency chain). So it should be fixed and you shouldn’t have to do this.

You may eventually see some import errors like this:

Running the dependency chain that Google supplies should be the first step.

If you continue to see import errors, than try to install them. They seem to be good at picking very reliable dependencies.

NOTE: Numpy takes like 20 minutes to compile on a Pi3. You’ll have to sit and wait.

Hopefully that continues to fix up the missing deps.